The Music of David Salminen

As with many of my friends and music fans, I have long been interested in finding, discovering, or inventing various ways to make sense of all and everything. But my real focus is more about setting up conditions conducive to “hearing” and “feeling” rather than “knowing”. So, although I am intrigued by contemporary hard science developments in such areas as astrophysics and bio-mimicry (this is a really promising area of study – learning from Nature, herself), I am more interested in new metaphorical meanings than the literal accomplishments coming about in these fields.

In the interest of collaborating more effectively with my allies, somehow, in this search, I would really like to share my 2014 Water music recording with many more people. The Water concert – August, 2014 – was earth-based if there ever was such, but with the perspective suggested by such iconic space-age images as “The Blue Marble”, a photo of our Earth from space, although from relatively near by – and “The Pale Blue Dot”, a photograph of our Earth taken in 1990 by Voyager I, when it was already out well beyond Saturn, looking back at Earth. Subsequently, NASA shut the Voyager cameras off, to save power for the long mission ahead, out beyond the “Termination Shock”, the “Heliosphere” and all the other non-specific “edges” to our Solar System. 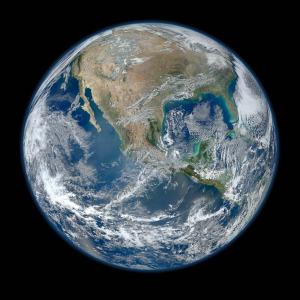 above: “A ‘Blue Marble’ image of the Earth taken from the VIIRS instrument aboard NASA’s most recently launched Earth-observing satellite – Suomi NPP. This composite image uses a number of swaths of the Earth’s surface taken on January 4, 2012. The NPP satellite was renamed ‘Suomi NPP’ on January 24, 2012 to honor the late Verner E. Suomi of the University of Wisconsin. Suomi NPP is NASA’s next Earth-observing research satellite. It is the first of a new generation of satellites that will observe many facets of our changing Earth. Suomi NPP is carrying five instruments on board. The biggest and most important instrument is The Visible/Infrared Imager Radiometer Suite or VIIRS.”